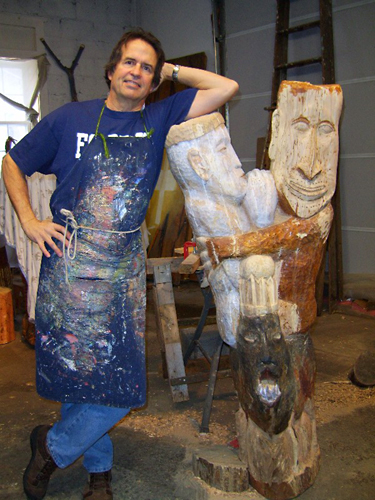 Dick Ranck is married to a Philadelphia School teacher and has two daughters. He makes his living as an artist.

He is influenced by Michaelangelo, Caravaggio, Bonnard, Anselm Kiefer, and Philip Guston.as well as aArtist's Statement
in 1984, while four of us basked in our success as figure painters, one mate said, abstraction is dead. That I disputed, as I was attracted to it, found joy in it, since my parents exposed me to it. So, what is art for, anyway. My work since then as wondered that, wondered at the beginnings of marking to express an idea. And changed considerably.

In these many years I have explored myriad ideas expressed by other artists alive and dead, how they saw and see, applying them to paint and form. Once absorbed, I am guided by brevity, whimsy, and what I imagine others see; rarely making preparatory studies or maquettes. Those things I paint and sculpt are long narratives for viewers to enjoy. Surface is important to my work. A great deal of paint becomes pentimenti as I proceed. I use chisels much like a draw, to express the form. I am trying to understand, visually, the unseen and intuited.

I am able to draw accurately, but generally put traditional accuracy aside in pursuit of unscripted form. Grace of line and good use of space are important to me. Guston, Keiffer, Twombly among others, and the work of Michaelangelo, and sculpture from Oceania and other early cultures- all of which seemed to seek answers from or to portray the spiritual- led me away from the figure painting.
When I am asked, I describe my work as primitive. I know answers that early people did not, but only just more.ll Primitive Art, which has unshackled his imagination

He listens attentively to everyone.